Top 8 Things You Should Never Put in a Garbage Disposal

Select the service type to get started.

Top 8 Things You Should Never Put in a Garbage Disposal The garbage disposal is the modern homeowner’s dream solution to any leftover piece of food in the kitchen. Don’t get carried away, however. There are certain things that can do a lot more harm to your garbage disposal than you might think!

Grease or Oil Straight From a Pan

This is the number one contender for a variety of reasons. First, hot grease can burn the piping in your kitchen disposal. This can do irrefutable damage that causes your disposal system to be essentially useless. Second, if the grease is cool and put down the disposal, it will congeal (clump together in a gooey state) and back up the disposal process. It might start out as a liquid, but it can cause major damage as it solidifies.

Instead of placing grease down the drain, pour any leftover grease from your pan into a metal can and place it in the freezer. Do this every time you cook to fill the can. Once it is full, throw the can away into your trash can. This will save you money from repairing your garbage disposal in the future.

This one should seem obvious, but a metal garbage disposal cannot destroy a metal fork, knife, spoon or otherwise. Instead, the metal object will just spin around and create a weapon that destroys your disposal. Remove any metal dishware from your plate before placing it in the sink or near the disposal.

Similar to metal objects, your disposal blades are not large or sturdy enough to break down large bones. Granted, small bones like the ones you find in fish are okay to send down the drain, but it is safer to assume the bones you have from your chicken or any other animal are too large to go.

Instead of risking putting them into the garbage disposal, put them in your compost bin. They are able to decompose there and won’t cause any damage.

This is a mistake home DIYers and those who love crafts commit too frequently. It might seem like an innocent choice to send the used paint and paint water down the drain, but it will cause irrefutable harm in the end. As the paint dries in your garbage disposal, it will cure and harden. This will block the disposal and clog the drain in a way that can only be fixed by replacing the whole unit.

Try to clean your brushes thoroughly ahead of time in a separate container, and then dispose of the paint and paint water outside to reduce the risk of damage.

Eggshells do not decompose quickly enough to validate being put down the drain. When they have been put down the drain, the disposal blades don’t chop up the shell into small enough pieces – so they become large “roadblocks” for any other food item that needs to be disposed of. The large blockages they cause require the entire disposal system to be cleared out – just toss them into your compost bin instead.

Pits from fruits like avocados and peaches are extremely dense and cannot be broken by a knife (unless you put a lot of force into it). If a knife can’t break it, neither can your garbage disposal. If a dense fruit pit finds its way into your garbage disposal, it will just bounce around and cause damage to your unit.

Avoid placing these in your sink and opt to pit your fruit away from the sink, and place them straight into the compost bin instead.

The “Branches” From Grapes

The little twigs attached to grapes are innocent enough, but they can cause a major clog in your disposal. They are similar to fruit pits in they just bounce around in your disposal and cause harm – they won’t actually be broken down and carried away by the disposal.

Anything extremely fibrous, such as these little branches, will clog up the disposal and get caught on the blades. This will, eventually, cause the disposal to stop working altogether.

The small fragments of beans are deceiving – they seem small enough to pass straight through the garbage disposal with no issue. Therein lies the issue: coffee grounds are too small to be destroyed by the disposal blades, causing them to gradually pile up and cause blockages. Instead of pouring your used grounds down the drain, put them into your compost bin.

For more information on what to send down your drain, contact us at Southern Air to get your garbage disposal back in working order. How To Use A Plunger

Picture this: you’ve flushed your toilet, and to your horror, the water slowly rises, threatening to overflow. Or, you’re enjoying... Why is My Water Brown?

Homeowners should be prepared for any problems that may come from their home units, but some problems will come randomly... How To Know If You Have A Gas Leak

Have you been experiencing breathing difficulties or noticing strange smells in your home? If so, you may be dealing with...

Southern Air is rated 5.0 based on 8,654 reviews online
MORE REVIEWS

Our team is standing by and ready to help. 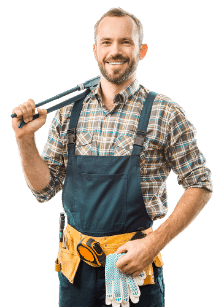